The New Rockridge Safeway Freaks Me Out

My lucky stars have blessed me with many, many things: fetching good looks, irascible wit, jumbo-sized jugs, and a tendency to have fun wherever I am. In addition to these things, I’ve also been blessed with an immune system that rivals that of the toxic avenger. (Although that may have less to do with lucky stars, and more to do with the fact that I ate tons of dirt, braunschweiger, and boogers as a kid).

Suffice it to say, when I DO get sick (approximately once every 18 months) , it always comes as a total surprise, and leaves me both physically challenged, and mentally fucked. I AM AN ANGRY SICK PERSON.

Consider this scene, of my last illness: a 24 hour projectile vomiting stomach flu that hit me two days after Christmas 2014, while home in Minnesota, for the holidays:

So, two weeks ago, I was minding my own business when SUDDENLY I SNEEZED 20 TIMES IN  A ROW.

From there, everything went exponentially downhill. More sneezing. Congestion. Headache. Confusion!   I had to leave work early. When I got home, I blew my nose about a thousand times, and then I mixed up a hearty dose of my HEALING BREW

Lemon Juice (from real lemons) (slice lemons and put in brew) (eat them if you dare!)

Then I set myself up for an evening of binge watching Netflix. Except, I was so congested, and achy, that I couldn’t really focus on movies, or TV shows. Or anything!   Comic books?  Magazines? Ditto.  Podcasts? No way hosay.  So, I spent the evening staring up at the ceiling,  groaning, cursing, and listening to the pus wooshing around my skull.

Next day I still felt shitty, but I had to drag my ass to get some more lemons for additional batches healing brew, and the closest store was the New Safeway in Rockridge which just opened a few weeks ago.

If you live anywhere near me, you’ll note that construction has been going on for a long loNNNNNNNNNNNng time at the 51st/Broadway shopping center.  I heard rumors that the new Safeway would be magnificent BUT I HAD NO IDEA IT WOULD BE A GLORIFIED GRAVY PALACE OF CONFUSION. I mean, make-your-own burrito stand?  Rotisserie Row?  A whole aisle just for kombucha? Organic tampon bar?  It’s almost as if….. the ashes of the old Safeway were sprinkled with uranium, and UP SPROUTED A  MUTANT GROCERY MOUTHBEAST  which spent one evening  guzzling down other stores,  and assuming their identities.    The new Safeway could easily be  Sprouts, Grocery Outlet, Whole Foods, or Berkeley Bowl, depending on which aisle you’re standing in. Fresh hell, indeed.

After about an hour of walking around and groaning like a mildly tranquilized bear,  swatting away offers of samples,  I finally found my way to the produce aisle, and packed my basket full of healing lemons, and a ginger root. And then I saw it. GOOD CHRIST…IS IT….NO….IT CAN’T BE….TURMERIC ROOT??? (Add “Any Asian market anywhere” to the list of stores swallowed by the uranium mouthbeast on its rampage)

“Aw shit yeah, I’ll boil this turmeric root with some ginger, and KILL THIS DISEASE ONCE AND FOR ALL.”

I hastily made my way to the check-out counter.

“Hiiii, how do you like the new Safeway?” said the check-out clerk.

“Hmm, what’s this?” she said, pulling out the turmeric root.

“Oh, it’s turmeric root!  I’m gonna take it home, and boil it to kill off my head cold.”

“I’ve never heard of it,” she said, flipping through her produce chart.

“Ooh, turmeric is great,” said the lady behind me. “I can’t believe they have it here!”

“Me neither! But this place seems to  have everything you could ever dream of,” I  said to her.  I then told her the recipe for my healing brew, and exclaimed “Now I can add TURMERIC ROOT to it, instead of turmeric powder.”

“I’m sorry, how do you spell it?” asked the clerk.

At this point, management had to be called in, to examine the strange root. Nobody could find it anywhere on their list, nor identify it as anything else, and yet I kept insisting it must be there.  I could see the people at the back of the line, shaking their heads at me for being special needs. Managers flipping through alternate produce lists. Nothing.

“Well, maybe it hasn’t been added to the list yet?” I offered. “It is an unusual little root. But it’s turmeric alright.”

“That stuff has magical properties,” said the lady in line. “Just love it.”

“Tell you what,” whispered the clerk.  “Just take it.”

And so, I did. As I hoisted my bag o’lemons on my shoulder, the lady in line behind me said “I’m gonna go back and get some of that—I’ve had the same dumb cold for weeks.”

When I got home, I laid out all my ingredients, and prepared to make another batch of healing brew.

Everything went according to plan, except for one small detail.  When I cut the turmeric root, I discovered, it wasn’t actually turmeric at all BUT A FUCKING  GOLDEN BEET. DID YOU KNOW THEY MADE BEETS IN THAT COLOR???

Here is a picture of Turmeric Root: 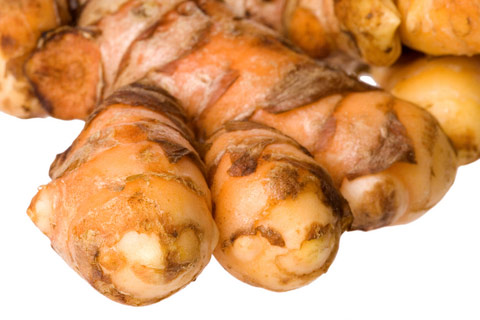 Here is a picture of a golden beet. 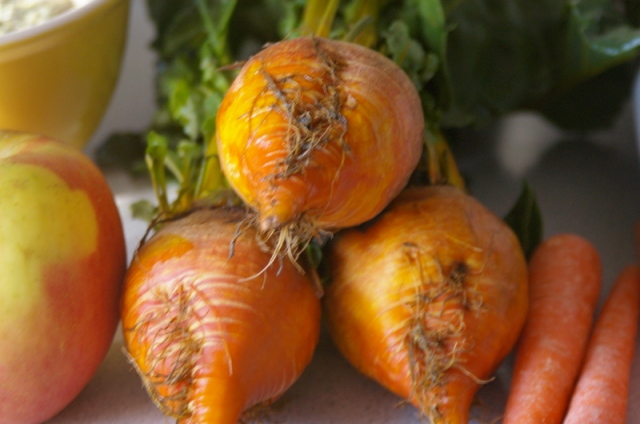 Note that they don’t really look very similar at all. But imagine your  head throbbing with bile and that you are also tweaking on Sudafed, and hopefully you can see how I would make this mistake. What was interesting about it, was I had everyone in that grocery line (except for the people at the end, who had no idea what was going on, only that I was holding up the line) BELIEVING MY ILLUSION WAS REAL.  Which made me conclude that, as long as you express your illusions forcefully and with conviction and  also believe in  them yourself, you can get stuff for free!

IN OTHER WORDS I WAS DONALD TRUMP FOR 1 MINUTE, AND IT WAS AWESOME!

“Believe me, that’s turmeric alright. Swear by the stuff. People say that stuff is great too.”

“Where’s your manager? Let me talk to the guy in charge. No offense, sweetie, but you look like you’re new here.”

You’ll be happy to know that I did in fact, fully lick the head cold and lived to laugh another day.  And even though I don’t understand the point of beets that are golden in color, I ate my stupid beet with butter, and know what? It tasted like a beet.

Hello. I live in Oakland. I write, I rap, I play drums, and I do some neat party tricks.
View all posts by ArleneShirlee →
This entry was posted in Uncategorized. Bookmark the permalink.

2 Responses to The New Rockridge Safeway Freaks Me Out