On Monday morning,  a transformer blew up in El Cerrito,  and knocked out the power grid in a large chunk of the East Bay-including–my office in Berkeley!

After I did my office-managerial  duty of  reporting the outage to PG&E (who said the outage was likely to last 3 hours or more) , I sat at the front of the office  with the rest of our staff, who were chatting, dozing, and gazing at their phones.

“Awesome” I thought, smiling to my phone.  “Nothing I can do now but get caught up on all of the latest news and gossip.”

Then, my boss came over. (cue the  sad trombone)

“Hey. I was thinking this  might be a good time for that  printer project” he said to me.

Even though what he said made made no actual  sense, I somehow knew what he meant. See, my  boss just had his second baby about a month ago, and has not likely slept since February.  Therefore, I’ve cut him a tremendous amount of slack for saying the occasional wacky thing.

What he meant to say was “Because the office is in complete darkness right now, we should probably move those heavy  file cabinets around–the ones we talked about rearranging  last week.”

“Yes,” I said,  grabbing my flashlight, and making my way to the server room, where our hand-truck lives.

The next hour was spent pushing, and hauling heavy shit  around  in  near- darkness.   At one point, as we took a moment to catch our breath and  wipe the sweat from our faces,  my boss  said “You know…it’s funny how the eyes adjust to the darkness. I saw this documentary where they researched how people’s brains react to sleeping in a different bed for the first time. Turns out, half of your brain is always awake and that’s why it’s hard to sleep in a new bed.”

After about an hour, the electricity was turned back on, and I was left with the task of purging and  reorganizing all of the office supplies  I’d emptied from the file cabinet. So many things from the ancient days! Rolodex files, yellowing labelmaker tape, etc, etc. But by far, the greatest discovery, was the magnifier sheet I found between two old crusty hanging file folders, made by the now defunct company Market2Lead.

“Whoa!” I said looking through it. “Another dimension!”

Of course, it didn’t take me long to figure out that taking an instagram  selfie with the magnifier sheet  in front of my face is about the best way to take a selfie because it makes me look huuuuuuuge.

So,  I  “borrowed’ the magnifier sheet and took it home with me that night, to do some more photo experiments. More fun than a bag of expired fireworks! Sigh.  If only Market2Lead knew what joy they brought to my life for a short moment. And how much joy still remains.

NOTE: NONE OF THESE PHOTOS USE ANY KIND OF FILTERS! 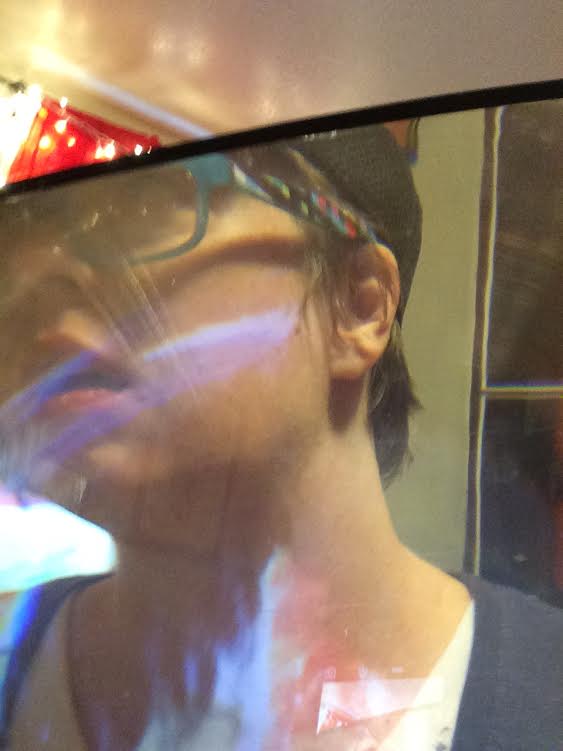 Hello. I live in Oakland. I write, I rap, I play drums, and I do some neat party tricks.
View all posts by ArleneShirlee →
This entry was posted in Uncategorized. Bookmark the permalink.